Vietnam is also a transport junction from the Indian Ocean to the Pacific Ocean.

Climate: Vietnam lies in the tropics and monsoon (detail)
Topography: Three-quarters of Vietnam’s territory consists of mountains and hills (detail)
Administrative Units: Vietnam is divided into 64 provinces and cities. 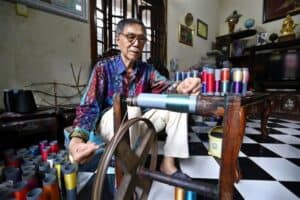 A Day of Biking Fishing Farming and Cooking