Three cities in Vietnam are among the most popular travel destinations in Southeast Asia.
Recently, Travel + Leisure magazine’s selection of the top 10 cities in Southeast Asia under the Asia’s Best Awards 2022 featured Da Nang, Hanoi, and Ho Chi Minh City, all of which are located in the Vietnamese nation of Vietnam.

The readers from all around the world cast their votes for this year’s edition of the magazine published in the United States, and the results showed that Da Nang, Hanoi, and Ho Chi Minh City were rated third, fifth, and eighth, respectively.

In 2022, Bangkok, the capital of Thailand, will hold the title of the finest city in Southeast Asia for this particular category. This location is reportedly regarded as one of the most popular tourist hotspots in the entire globe by Travel + Leisure magazine. 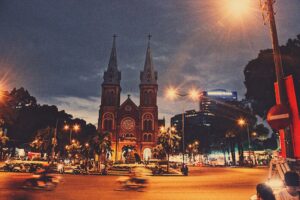 In 2022, the Sheraton Saigon Hotel was recognized as being the best hotel in a city in Vietnam.

The Capella Hanoi Hotel and the Park Hyatt Saigon are the next two hotels on the list of the top ten best hotels.

Phu Quoc and Con Dao are the most popular tourist sites in Vietnam. Both of these islands are considered to be among the most beautiful in Southeast Asia.

The year 2022 marked the first time that Phuket Island in Thailand was recognized as being the greatest island in Southeast Asia.

Also included on the list are the islands of Koh Phi Phi and Koh Samui, all of which are located in Thailand, as well as Bali, which is located in Indonesia.

The Southeast Asia issue of Travel + Leisure magazine was the one that made the initial announcement to the general public in March regarding Asia’s Best Awards 2022.

The award categories cover a wide variety of businesses, such as journalism, travel, hospitality, and food and beverage services, among others.

Over 16 million people pick up a copy of Travel & Leisure each month, making it the most popular travel publication in the world.